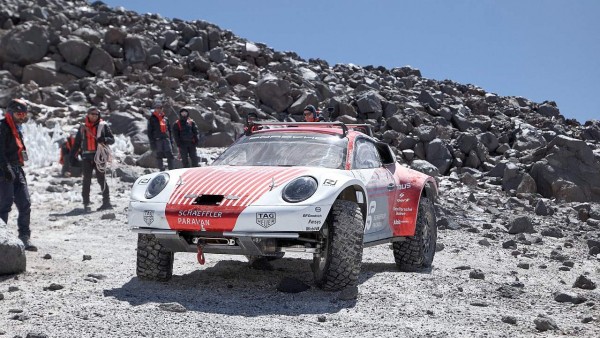 For almost 60 years, the Porsche 911 has been put through its paces on the race track and on the road. Recently, another new chapter in performance began: two 911s built for testing purposes completed an extreme test away from paved roads on the slopes of the world's highest active volcano, the Ojos Del Salado in Chile. In a climate where the air is extremely thin, the thermometer remains well below freezing and even plants can no longer survive. The test team, headed by Porsche factory driver Romain Dumas, had deliberately chosen this environment, whose merciless conditions push the Porsche 911 to its limits.

With Romain Dumas at the wheel, the 911 traversed steep slopes and ice fields that demanded all the skills of the vehicle and team. Temperatures were as low as minus 30 degrees Celsius, and the oxygen content in the air was only half as high as at sea level. Impassable walls of ice and snow then put the final limit on the test at an altitude of 6,007 meters.

"That was an unforgettable and special moment in this place that is as breathtakingly beautiful as it is unforgiving. Higher than us  were probably only the planes today. From the first meter, the 911 felt robust and agile. We didn't spare ourselves and demanded everything from the car," said Porsche factory driver Romain Dumas, who also served as team principal of RD Limited. "Our respect goes to all those who have made it even further up in the past. Although there is an extreme amount of ice and snow towards the top of the volcano, we were able to drive up to over 6,000 meters in altitude until impassable walls of ice and snow prevented further progress. We are mighty proud of the team and the Porsche 911. Hopefully we can look forward to more such adventures in the future."

Frank-Steffen Walliser, Head of Complete Vehicle Architecture and Features at Porsche AG entrusted the project to Michael Roesler, Head of Complete Vehicles for the 911 series. "It was something very special to design a 911 like the world has never seen before. A small team of enthusiastic engineers made it possible. The 911 has already proven successful on the racetrack and, of course, on the road. And now also under extreme off-road conditions," said Roesler.

Both mission vehicles were built on the basis of the current 911 Carrera 4S. Its 331 kW (450 hp) 3.0-liter six-cylinder boxer engine was left in standard condition and combined with the seven-speed manual transmission. With its robust yet lightweight chassis construction, short body overhangs and powerful drive train, the 911 has the best requirements to perform at extreme altitudes.

Special equipment for the 911

In collaboration with RD Limited, the engineers in Weissach used this as the basis for developing an extremely off-road capable vehicle specifically for use at extreme altitudes. First and foremost, both 911s were fitted with a massive roll cage and bucket seats with special seat belts. Furthermore, portal axles were installed in the cars, allowing a ground clearance of 350 millimeters, as well as a shortened gear ratio adapted to the large offroad wheels. In addition, the cars are equipped with lightweight but extremely tough underbody panels made of aramid fibers to enable them to negotiate rocky landscapes and scree slopes without any problems.

A technical highlight is the Porsche Warp Connecter, which was originally developed for use in motorsport. This enables a connection between all four wheels so that even with extreme entanglement the axle loads remain as constant as possible, thus ensuring ideal traction. In addition, the engineers have installed manual differential locks and a steer-by-wire system. The body has been heavily modified. Firstly, to allow the 310-millimeter-wide off-road tires sufficient clearance in the wheel arches, and secondly to be able to integrate a winch at the front. The radiators were moved from the front to the upper rear area to protect them from damage in extreme off-road conditions. One of the two vehicles is styled to look like the Porsche 963 LMDh race car. The look of the second vehicle was designed by the Style Porsche Team in Weissach.

"Over 30 years ago, a team of Porsche engineers installed all-wheel drive in a Porsche 911 for the first time to answer the question: What if? I am very proud that this curiosity and ambition still drives our development engineers to push boundaries and test new ideas," says Frank-Steffen Walliser. "Projects like this are what set Porsche apart. The team reached for the stars in Chile, and this first adventure will hopefully be followed by others." (Photos: Porsche AG)