Tailwind for the air-cooled: This was the 39. MAIKÄFERTREFFEN (May-Beetle-Convention) in Hanover 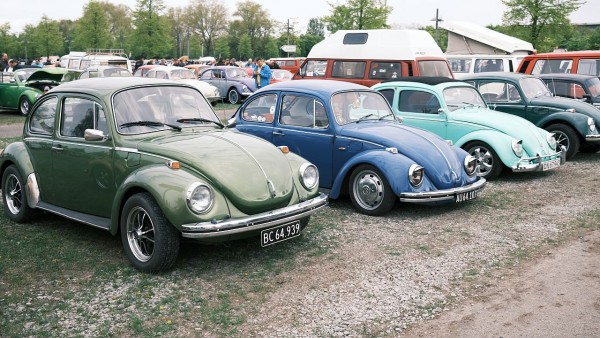 Those who drive Bulli are clearly advantaged. At least when it comes to the event “Maikäfertreffen” in Hanover. Whoever wants to completely get their money worth on this watchable event better arrives the evening before already, visits Mel’s Diner Party and crawls away into their bus to go to sleep eventually, only to, at the first cock-crow, stroll over the venue and wheedle the first deal of the day with the retailers. “One coat hook for the 23-Window-Samba-Bus for only 59 Euro, a original of course!” Finally the “Maikäfertreffen” is back!

Travelling with the Bulli was always something special
While the sun was already shining early in the morning in the rest of the republic, it was actually pretty cold in Hanover still. However this didn’t hinder the early starters to face the entrance in multiple rows. Whether the Belgians, the Dutch, the Danes or the Swedish – the journey to this event doesn’t seem to be to long for them. The Scandinavians love their beetles, and they clearly drive them with pleasure.
Whoever can, will already turn the journey to Hanover to the goal. Those who travel with a few mates in the T1, T2 or T3, maybe driving through the Harz, or the Weser Uplands, don’t do anything wrong, the journey itself can turn into an adventure. Those who were able to participate in this year’s 39th “Maikäfertreffen”, (obviously the “Maikäfertreffen” 37 and 38 only took place in a small group due to corona!), won’t regret their decision. Around 3.000 air cooled Volkswagen (and a few Porsche) have been there.

A Dannensauer and what, please?
Next to the main power, composed of Beetle, Bulli and Karmann, there were, like in all those years, several real rarities for example the Dannenhauer and Stauss, which is often mistaken for a Porsche 356 Roadster, a handful of Volkswagen Brasilia, which wanted to compete with the Beetles in Brazil, and yet they were angular Beetles themselves. Furthermore there were a few sporty Beetles and ultimately the type 3 that becomes increasingly rare. Yes a Rometsch is rare, a Hebmüller as well, but they started their automobile career as a rarity from the beginning. Who would have thought that mass models like 411/412 or VW 1500/1600 (type 3) will make themselves scarce like that one day? Models that saved themselves into caring hands may have reached a biblical age. This counts for sedans and variants like TL equally. And who doesn’t want to keep up with the galloping prices in the Bulli business, considers acquiring a Brazilian T1 or T2 for “half the price”. For everyone, who wants to not only look at their Bus, but also drive it, it is worth a consideration. With e.g. Hangar 426 there are few companies now that specialized in importing Brazilian models.

The fascination for uncomplicated classics increases
It certainly looks like that the question if there will be continuously demand is answered – in a positive sense. It’s been a while since the chroniclers have witnessed so many young people in air cooled Volkswagen or Porsches. It is clear, that many of the self-proclaimed keepers of the grail are searching for their heart drops considering the negatively turned rear axle and edgy rusty looking classics, but the fascination for uncomplicated classics from Wolfsburg, Zuffenhausen and Hanover seems to capture more and more new contemporaries. And parts specialists like Hoffmann-Speedster, who can support Volkswagen enthusiasts with thousands of spare parts are present too. Henry Hackeroth can already start planning the next “Maikäfertreffen”. That would have to be the fortieth.